In the manner of the wonderful Shug, he of hammocking fame on YouTube, I went out on a simple overnight hike, rather than a longer more complex trail.

I finished my term as choir president last Wednesday evening, and I’m giving myself a celebratory change of focus and pace. Cathy dropped me Thursday morning along the Hockley Road where the Bruce Trail crosses it. I went north along the main trail, climbing up and down through the hills outlining the north of the valley — gorgeous narrow valleys, and equally narrow ridges, covered in all manner of forests. Some were early conifer plantations, I assume at least instigated by the wonderful Shelley Anderson, whose efforts led to the reforestation of a remarkably large portion of the Mono Hills that had become sandy wastelands during the drought years after the First War. I also walked though gorgeous quite mature maple/beech/ash/hemlock bush, particularly in the valleys that were too steep to lumber and too steep for cattle to graze.

Then up onto the Mono plateau north of the Hockley Valley, with its flat fields placed between rolling sections. 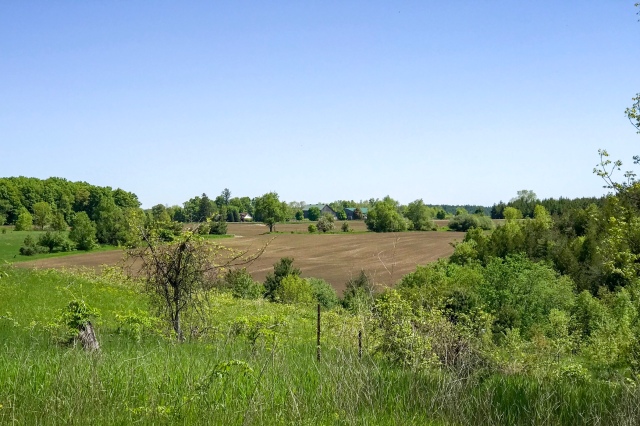 So much to see along the way! One special section of the Bruce Trail directly north of the Hockley Nature Reserve is a narrow easement owned the Bruce Trail, running between a horse farm on one side, and a recently abandoned farm on the other. Bobolinks burbling, a wren guarding its bluebird box, a Brown Thrasher double-calling its buzzy song, and old farm-lane apples and chokecherry trees humming with honey bees, bumblebees, myriads of tiny- to medium-sized solitary bees and wasps, hover flies, muscid flies, and more. I could hear one tree from more than 5 metres away! I saw Monarch Butterflies, a Fritillary of some sort, several Swallowtails I couldn’t identify, and multitudes of Spring Azures. A Raven croaked above a nearby bushlot.

That took me into Mono Cliffs Provincial Park, where I wandered along most of the network of trails. I came here in October 1975, when I brought my first class of Grade 11s to Sheldon just to the east. Bill Currie brought us over to Mono Cliffs by tractor and hay wagon for a day of hiking and relaxation sandwiched between the rest of the field ecology studies I’d planned. Since then, I’ve probably been here with a couple of hundred classes, including the many days after I retired that I supply-taught at an outdoor education school right beside the Park.

There’s so much to love about the Park — scenery, geology, glacial geomorphology, history (from the very first people as they were advancing across North America, through the colonization period, and including the recent period of the planning and realization of the provincial park). There’s the botany — the rare ferns, the ancient cliff-face cedars, the patterns of forests according to the landforms and the recent landuse, and the changes since the Park was initiated. There are the stories I’ve learned from the many people I’ve worked with. 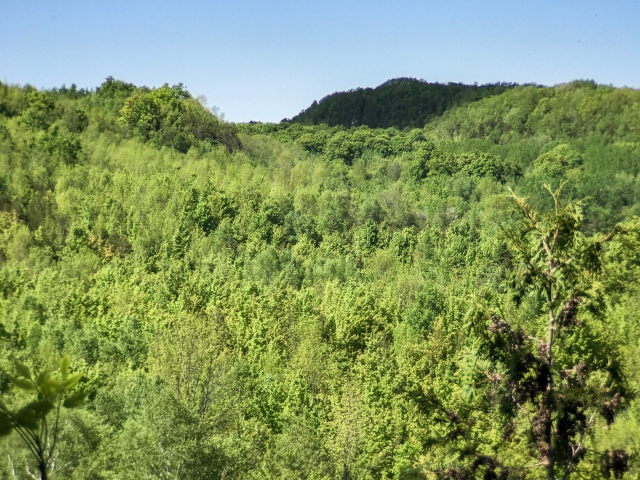 Izzy is one of those stories. The inimitable ‘Skid’, one of the first staff at the Mono Cliffs Outdoor Education school, concocted a tale about an ageless fellow who spent summers in a particular crevice-cave along one of the side trails. Skid, or another of the staff, would dress up in old work clothes and have pot of tea bubbling over a small fire as a group of students would walk by. He’d invite them up, and captivate them with stories about the fossils in the wall of his cave, and about how the glaciers shaped the valley, and about the cliffs and their ecology. So I dropped by Izzy’s Cave — but he wasn’t there. 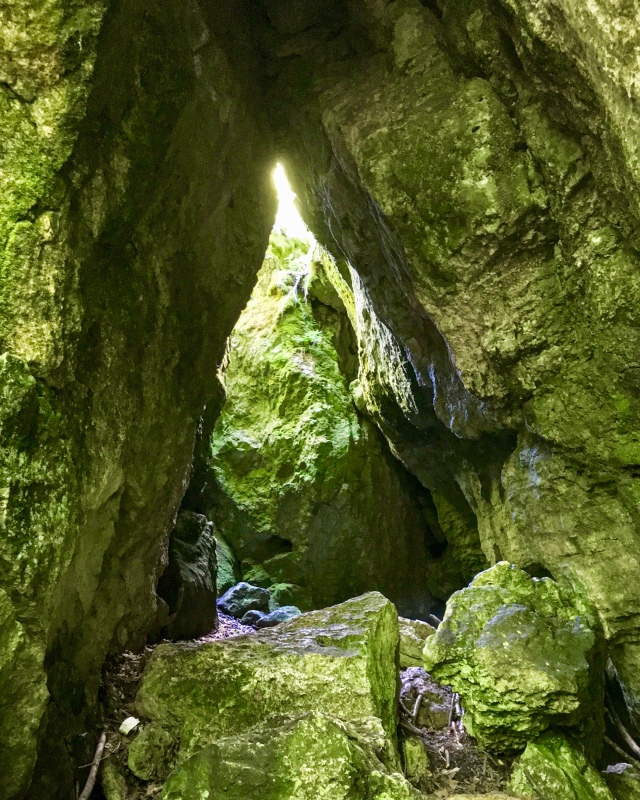 A favourite location of mine in Mono Cliffs Park is what we called the Sheldon Spring, one of the sources of the creek that ran through the outdoor education school I worked at for 17 years. It runs year-round, coming up through an old well-tile a farmer put there years ago for his cattle to water from. I used to challenge students to hold their forearm fully in the 7°C water for a minute. It’s too cold for most! The water comes right out of the bottom of the escarpment, so it’s likely great water for drinking. (I treated it anyways with my ultraviolet sterilizer.) That was the seventh, eighth, ninth, and tenth litre of water for the day for me. 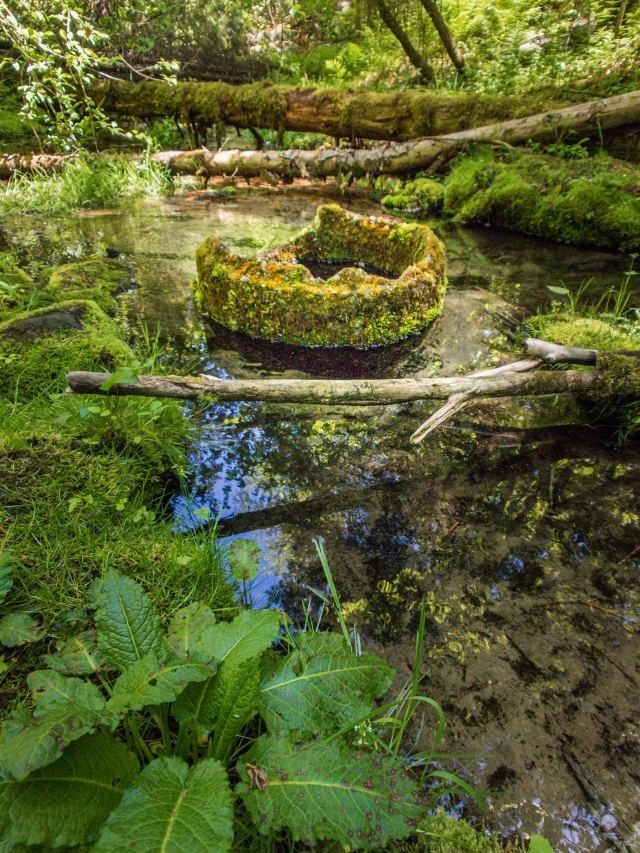 I wandered along many of the trails, looking for a good spot from which to photograph the sunrise of my second day. I went around the East Outlier, up the Spillway, along part of the Clifftop Trail, over to McCarston Lake — another location that holds many stories for me.

It was a great location for supper of Japanese ramen with spicy sauce, dehydrated vegetables, and a foil packet of tuna. I’d rehydrated the veggies and the ramen noodles in a titanium bottle as I walked, so supper was a quick task of heating them up over my alcohol stove and adding adding in the tuna.

I went up around the old ski hill, and ended up at the North Lookout. That looks south-east to Toronto, which was clearly lit by the setting Sun. I decided that location would be beautifully side-lit by tomorrow’s rising sun. Sunset from there was gorgeous, with the Belt of Venus rising over the twinkling lights of Toronto. 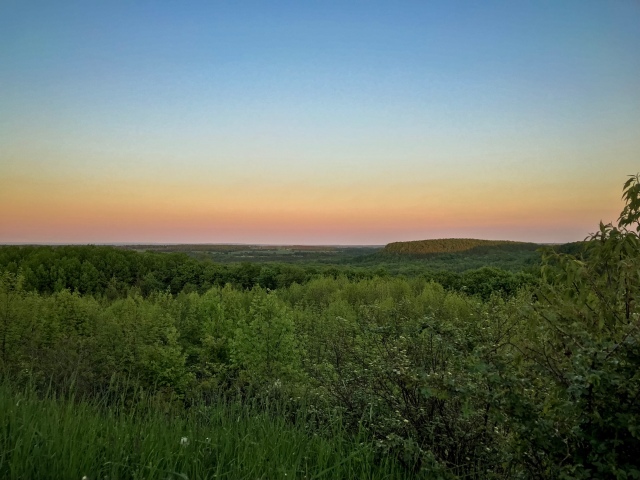 A highlight of the sunset was the lazy glide-by of an adult Bald Eagle, seemingly unperturbed by a Crow screaming at it from a respectable distance. The huge dark bird with white head and white tail wasn’t very concerned with a so-much smaller noisy pest!

I went off and hung my hammock north of the cliffs. The night was warm, the skies were incredibly clear, the coyotes sang several short chorales through the night, and the stars faded away after 4:30 A.M. as the robins and vireos started their morning chorus. I packed up and went back to the North Outlier to catch the awakening of the day. 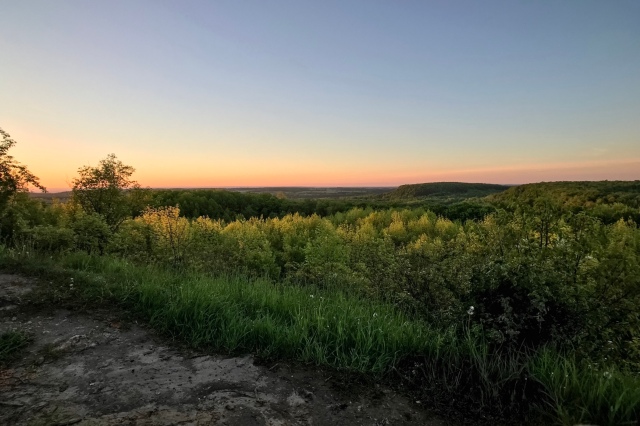 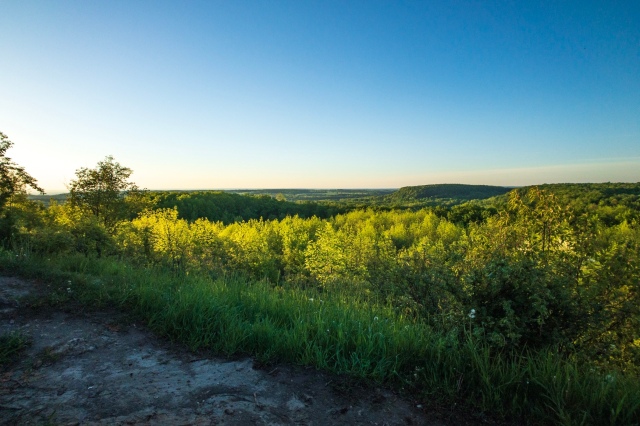 Another of the features I love in the park is the drunken moraine landscape to the west of McCarston’s Lake. The trail winds around miniature kettles, wet mostly only in Spring, and traverses the narrow ridges dividing those house-sized to apartment-building-sized holes. I constantly marvel at this landscape that’s only 11,000 years old. I try to unravel the stories about how the melting ice left this dip here, and that ridge there.

Just before I reached the Sheldon Spring to refill my water bottles, I nearly stepped on this little guy. This is the red eft stage of Notophthalmus viridescens, the Eastern Newt. The red eft is terrestrial for two to three years as a juvenile, before returning to metamorphose into the aquatic adult stage that can live for another dozen years. The red spots along its back produce the foul poison tetradoxin. The bright orange colour of the eft stage is to alert potential predators that they taste terrible and can kill if eaten. I spent several minutes lying on the trail taking photos.

Only after I got home and looked closely at the photos I realized that this little eft had tiny white juvenile thrip crawling across its face!

I need to acknowledge the amazing efforts of the Bruce Trail volunteers for all the care and maintenance they give to those of us who hike many of the ones I’ve spoken too, including one man clearing along the main trail, spoke about their obligation to give back to the community they’ve gained so much from as they themselves have benefited from the work of others. This sure stake-end looks heart-inspired to me! 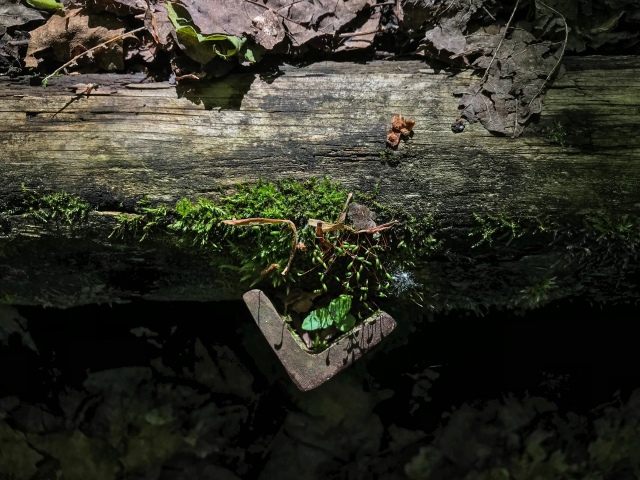 Retracing my path was just as deep an immersion as going outwards. I saw the same scenery from a different angle; I recalled the southbound part of my thruhike from three years ago seeing various gulleys and ridge perspectives again; I saw many of the same things from yesterday and from three years ago, anticipating them this time. That meant I noticed how quickly the apple blossoms were maturing, and how the patches of White Trilliums were turning pink in just one day as they senesced.

On my day outbound, I’d seen a few white drifting seed clumps from Large-toothed Aspen, Populus grandidentata. I found that interesting as I began to notice how relatively common this tree actually was, especially in the forests I estimated to have grown up after the farms began to be abandoned after the First War. This tree grows very quickly after an opening is created in the forest, such as by a fallen tree. Mature Large-toothed Aspens store food reserves in large underground roots. When the above-ground short-lived tree dies, the roots continue alive reportedly for centuries. Every few years, the roots will tentatively send up a few shoots. If the light levels are high, indicating another clearing, the shoots will skyrocket up, fed by the stored food reserves. If the light levels are low, the shoots will die, and the food will be saved for a future chance.

Nothing prepared me however for the sight of a 10 metre by 15 metre patch of ‘snow’ where the Isabel East Sidetrail meets the Bruce Trail at its junction. All of this seed ‘snow’ had fallen in the last 22 hours since I passed northward through here! I wonder if this huge seed crop this year indicates that the trees are now realizing their time is nearly up, and are investing in yet another way to perpetuate themselves? Huge numbers of seeds this year, with a low possibility of success, given that the canopies are quite closed! This is a photo of a small portion of the larger deposit. Now to wait for the next wind to spread these around, and the next rain to enable them to germinate!

It’s this sort of connection and wonder that deepens my joy and awe of the world around me. That’s a major part of why I hike. I’m more alive. Stiffer — and richer!

As I hiked my homeward steps, I began to get that awful red and warm soreness of a blister developing under the inner edge of the ball of my left foot. I stopped and covered the spot with a blister pad. But …

I had been intending on walking the 25 kilometres back home, however the thought of the last 10 km on flat hard roads wasn’t enticing. As I refilled my water bottles at the last good source, a passing woman recognized me. As we chatted, she said she was heading back to Orangeville to attend the weekly Climate Action March that Cathy also attends. She was happy to take me with her, so we hiked to her car and drove off into town. Phew!

Izzy wazn’t there. I wuz. Thankfully!